Sticky Organisations and How They Make Smart People Stupid 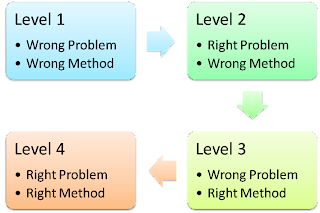 The thrill of being headhunted to a senior role in a successful and knowledge-intensive corporate on the basis of expertise is only balanced by the downside of finding yourself trapped in a cycle of ritualised meetings, unable to influence the strategic direction of the organisation that paid the recruiter so well to recruit you. In such a situation, several options become available:

Let me explain the relationship between a “sticky” organisation and Relationship Capital.

Relationship Capital is the social “capital” you build through establishing positive impressions and trusting relationships with key colleagues, stakeholders and potential internal customers, through trading and being able to bank favours at crucial times in the lifecycle of the business and personal careers. It explains the tendency within major corporations and political parties to appoint that “safe pair of hands” who turns out to be a dangerous idiot instead of the innovator who wants to move the strategy in a new direction, to change the rules. That “safe pair of hands” is usually the manager who is owed the most in Relation Capital transactions, the value of which would disappear if the technology and direction of the business changed and made the existing transactions void.
This explains the tendency to optimise existing products, services and business models instead of moving into the territory of creating genuinely new value by focusing on becoming effective. If you hold a big account of Relationship Capital, would you want to give it up? This also explains the 60-70% failure rate of systemic change programmes. When you change organisations, you make existing Relationship Capital void.

The message is: If you are a subject-matter expert or even a thought-leader, you cannot put your knowledge to work within a “sticky” organisation unless you can rapidly develop Relationship Capital. Without Relationship Capital, you will not be invited to the “right” meetings where you can make a contribution based upon your hard-won expertise.

The personal strategy that applies, involves enduring a rite of passage in meetings, negotiating deeper stages of trust, where your behaviour must be positive without appearing to threaten existing knowledge power and established Relationship Capital in the room. These will involve working your way through a sequence of meetings, demonstrating your respect for existing Relationship Capital, meetings where provocations to your expertise will be offered but to which you must not react.

The Expert’s Journey to Effectiveness

Ideally, an expert would be allowed into a meeting level 4 meeting from the start. In reality, the expert goes through a rite of passage (1, 2, 3 level meeting types) to socialise them, test their “right stuff” and their willingness to respect the primacy of existing, dominant (but often decaying) knowledge forms and their established Relationship Capital. Once you have developed high Relationship Capital, you will get invited to the real meetings that determine survival. It may take 18 months of self-control and sticking to the rules.
This explains why genuine “out-of-the-box” or even “no-box” thinking needs leadership sanction or a major crisis of survival that wipes out the bankability of existing Relationship Capital.

I will be talking about this at the Henley KM Forum Conference on 24th February 2010.

Victor Newman
Chief Innovation Officer: Institute for the Study of Zombie Organizations, CIO Milamber Consulting, Mentor to Social Innovation Lab Kent (SILK), Author, featured in the WSJ, contributed to HBR, and is on several Advisory Boards. His “Knowledge Activist’s Handbook” has been cited as the “best management book within the last ten years”. Head of Innovation Strategy, Technology Strategy Board (2008/9); As Pfizer’s Chief Learning Officer (2000-2005), influenced the Innovation Surge within Global R&D. His recent innovation consulting includes financial services, regulatory organizations, manufacturing, biopharmaceuticals, foreign government national innovation development strategies, manufacturing and telecoms. He is the inventor of several fast innovation techniques, has recently been applying his Innovation Leadership Model with CEO mentoring groups and prototyping Open Innovation strategies based on collaborative alliances with the University of Greenwich Business School. Victor is a Visiting Professor in Knowledge and Innovation Management to both Greenwich and OU Business Schools, and has served as a special forces reservist.